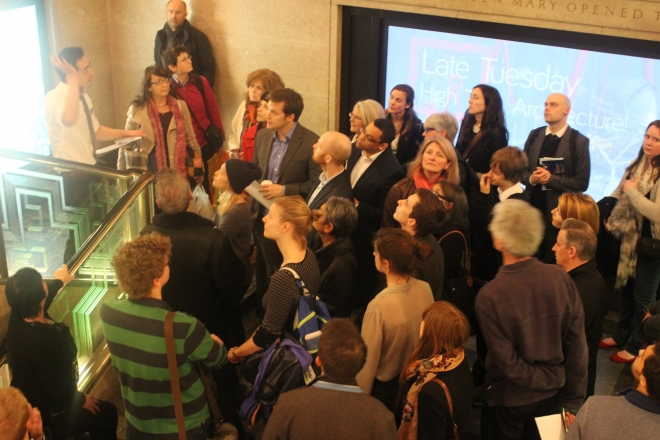 On March 25, The Royal Institute of British Architects hosted “Late Tuesday: High Tech Architecture” a four-hour event that included three 30 minute talks, two films, one workshop, two exhibitions on view, building tours, and live music. We caught up with RIBA Public Programs Manager Mike Althorpe to find out more about the motivations for condensing so much programming into one evening and how the audience responded.

AAO: “Late Tuesday: High Tech Architecture” was a four-hour event that included three talks, two films, one workshop, two exhibitions on view, building tours, and live music. What were your motivations for packing so many programs into one evening?

Mike Althorpe: Late Tuesdays is all about creating an alternative experience in 66 Portland Place and offering a variety of ways in which lots of people, from any background and understanding, can plug into an architectural theme and see it from many perspectives – an essential 'guide,' if you like. London is packed full of serious architectural lectures, so we wanted to create a model where people are not stuck in their chairs for hours at a time and can mix a drink and catch up time with friends with a talk, film, and tour. It’s really about creating an informal, lively, and sociable atmosphere in a historic building where people are not expecting it and at a time when they can do it. Tapping into the post-work crowds that head to the pub or bar was crucial, therefore, the live music and late bar are as important to us as the core programme of talks and events.

AAO: These days, people seem to have shorter attention spans and desire more personalized experiences. What was the response to offering a variety of short offerings for people to choose from?

M.A.: People really loved it and embraced the format. Most cultural spaces in London have a ‘late’ programme of some kind that it’s become a strand in its own right in the city, so, in many ways, we are adopting something already out there and tailoring it to our interests and our building's spaces. We have had incredible feedback and had around 480 people through the door in March – more people than we usually get to BIG keynotes of the Norman Foster or Daniel Libeskind kind. That so many people would turn up to something without any ‘names’ is a real sign that it has legs and so we feel very confident about it going forward. The criticism was that our talk spaces were not big enough, so we will try something new next time around.

AAO: When considering the staff time involved in planning, was it worth it to condense so many programs into one evening? Did “Late Tuesday” have enough impact for the effort to be repeated in the future?

M.A.: Absolutely! We make no money on the Late Tuesday programme – all the events are free – but it is extremely worthwhile to us pursuing this long term as a core programme strand. It is all about shifting perceptions about who we are and what we do and what goes on inside RIBA. When people get through the front door on these nights and see it, they are surprised. Generating that response builds loyalty, drives people to come back, and prompts them to tell their friends. And, of course, now they choose to tell the world via twitter and other outlets, so the event helps us generate reach well beyond the 480 people directly through the door, plus it gives us something to share with people who would never think about booking a traditional talk or lecture.

AAO: This event was related to the exhibition “The Brits Who Built the Modern World” and the BBC miniseries of the same name. How has this connection benefitted RIBA?

M.A.: The partnership with the BBC has been an incredible success for us. It has driven many new people to the exhibition at 66 Portland Place – about 15,000 at week 7 - and created a very complementary package for people to tap into from all backgrounds. We knew a TV/exhibition package about five of the biggest names in architecture was going to be popular, but what has been really popular is the tone with which that story is told. ‘The Brits’ is not about architects on their pedestals telling us how the world should be, it’s a story about their collective experiences and how they reacted to the world around them and what else was going on at the time. As such, people have really enjoyed and responded to the anecdotal stories, the music, and the archival footage that has been woven together. Making the story accessible from the start was something both the BBC and we agreed on and it has been a real strength of the partnership.

AAO: Are most RIBA programs related to exhibitions?

M.A.: We are going this way. Sure, we will always programme lectures with the great and good of architecture – those opportunities are too good to miss(!) and people expect us to. But our ambition is to build seasons around core exhibitions so that activities – both here and online - are united by a strong theme. We want to make sure that our activities complement one another. This does a number of things; it builds a strong comms’ narrative for press and marketing, it creates momentum with the public, and, more practically, it helps when talking to sponsors and partners - many bites, rather than one. To achieve this, we create project groups per season, so that from the start, programming, curatorial, marketing, press, and comms are working together in creating a compelling set of outputs united by a common story.

AAO: What advice would you offer to colleagues at other architectural organizations who are considering similar program formats?

M.A.: If anyone is thinking of pursuing a lates programme of the kind we have created, I would strongly advise avoiding egos, getting your time table sorted first before inviting anyone, grabbing as many volunteers as you can, mixing it up, keeping it light, avoiding being too literal with theme, and embracing it as a means to take risks and try something new!