How does a modest-scaled community project from a non-profit design organization end up at the Venice Biennale? AAO catches up with Archeworks, whose post-graduate design program focuses on the public mission of design, to learn how. Their project, the Mobile Food Collective (MFC), was selected along with six others to comprise "Workshopping: An American Model of Architectural Practice," an exhibition organized by the High Museum of Art and displayed at the US Pavilion from August 29 to November 21. We asked how they became involved in the exhibit, how viewers are reacting to it, and what the future holds for the Mobile Food Collective.

Katherine Stalker of AAO caught up with Susanne Schnell, Executive Director of Archeworks, to discuss how the project came to gain international recognition. For more details, read this summary (MFC.pdf) from Susanne.

Process: from design studio concept to Biennale exhibit
Katherine: Many of our readers work in smaller companies and will be inspired to hear about a small scale project gaining international attention. What was the process that led to the MFC being part of the Venice Biennale?
Susanne: Archeworks was fortunate to be invited to join the "Workshopping" exhibit organized by the High Museum. The curatorial team was familiar with the public mission of our work and approached us because we are looking for creative ways to engage designers as social catalysts. When we first began the discussion in January of last year, the MFC was only a concept for a design studio addressing the challenge of food deserts in many urban communities. Our design students continued to refine the Mobile Food Collective, and ultimately built a full-scale prototype over the summer. Being part of “Workshopping” at the Biennale, while not our ultimate goal in creating the MFC, has given Archeworks an incredible opportunity to present a vision for designers as a force for change. Click here to watch the video that Archeworks and our partner Thirst, Inc. produced as part of the exhibit in the US Pavilion.

Future of the Mobile Food Collective
Katherine: What does the future hold for the MFC? How will it be influenced by the experience at the Biennale?
Susanne: Our prototype will operate as a traveling cultural center throughout Chicago neighborhoods. The MFC’s programs will remain true to the vision of the founding design team -- --inspiring the rethinking of our relationship to food, incorporating heritage, ownership, exchange, and connection into a new fresh food culture. The next phase will include developing partnerships with groups such as urban farmers, schools, environmental advocates, and bike co-ops in order to continue to evolve the MFC in Chicago. 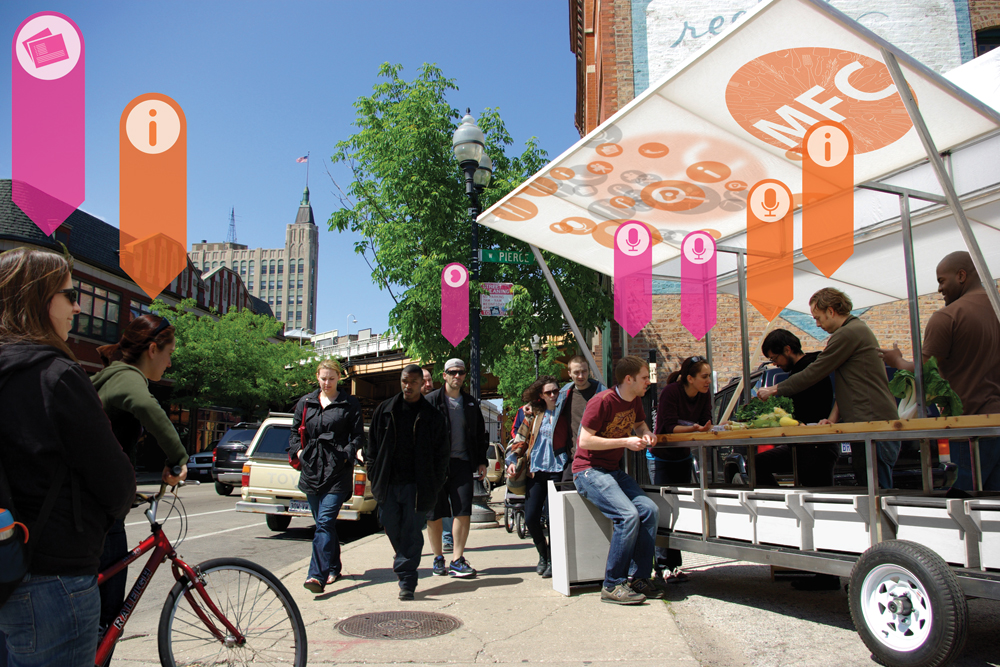 Report from Venice
AAO got in touch with two members of the Mobile Food Collective design team who traveled to Venice. We talked to them about their experience at the Biennale and how they turned a passive exhibit format into an active example of community engagement. Thanks to Catherine Muller and Mason Pritchett for this response.

Very early on the Archeworks project team was interested in programming that would add to the value of the exposure provided through the exhibit. This meant that in addition to providing an exhibit design (film + model) that would offer awareness of the aspirations of the project, there would be an on-the-ground, workshop-based event outside of the Biennale. The exhibit then needed only to perform two functions—balance the scale and density of information of other exhibits in the pavilion and act as a gateway for further discussion and exploration into the actual life of our project.

Because the core mission of the project is interactive and social—bringing people together around food—we felt we would be doing the MFC a disservice if we had not created a means to engage the public and make inquiries around the local food issues and history. This intent to extend the boundaries of the exhibit for ourselves and demonstrate the project somehow while in Venice led to the idea of the 3-day workshop with design students of Ascoli Piceno, and subsequent flash mob event that engaged different audiences in the city. The cultural exchange was invaluable; working with local students to forge a dialogue with people on the streets of Venice (an international crowd themselves), we were able to approach our questions from different perspectives, and gain such varied responses, narratives, and knowledge in return. The success of the workshop—design discussions, food discussions and further cultural exchange—proved the project was relevant for an international audience.

The overall experience provided affirmation that what initially resonated with our design team resonates globally—there’s something universal about the personal aspect of food, and tapping into that is the key to productive dialogue about what is and what isn’t working in our food culture today. If we can encourage more people to look at food through a social lens, then we might be able to make in-roads toward solving the food access and health issues.